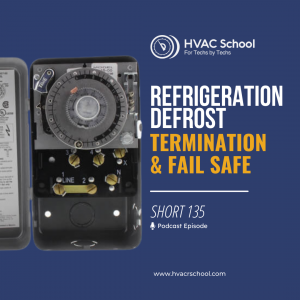 In this short podcast episode, Bryan covers the differences between defrost termination and failsafe. He also covers the basics of defrost in refrigeration applications.

In medium-temp applications (also called coolers), the box stays above freezing temperatures, but the coil may drop below freezing. When the air is above freezing, we can use off-cycle defrost. The coil defrosts when the system naturally cycles off. We may also use timed defrost, which pumps down or cycles the compressor off at set times to force a defrost cycle.

In low-temperature applications, the box will typically be below freezing. We may use electric heat to melt ice off the evaporator coil, and the fan stays off; this method is usually accompanied by a pump-down to remove refrigerant from the coil. We may also use hot gas defrost, which pumps discharge gas through the coil to melt the ice off it. (Kool gas may use a warm fluid instead of hot gas.)