Entropy in Refrigeration and Air Conditioning 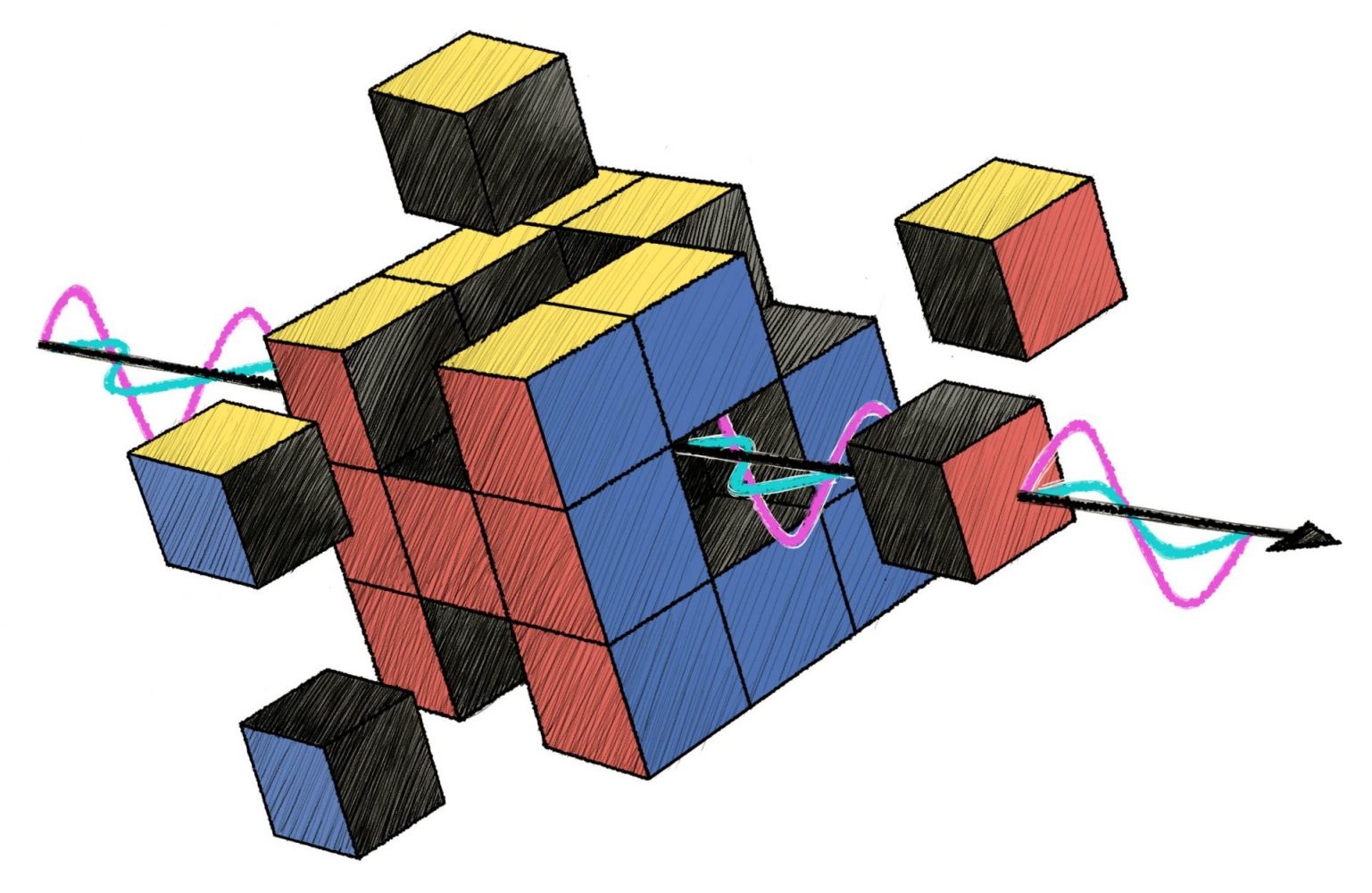 In the trade, we talk a lot about changes in enthalpy, especially when we are looking at total heat exchange over an evaporator. Sometimes, you will bump into the word entropy, and I wanted to take a stab at making it more understandable.

Many people understand entropy as the condition in which molecules become more disorganized and spread out. Some people would simply describe entropy as a state of disorder, and my favorite is that entropy is a mathematical relationship between heat and temperature. While these are correct, they are rather broad definitions of the term. They don’t precisely describe entropy’s role in refrigeration.

One way the molecules react is by undergoing a phase change. Refrigerants exist in gaseous and liquid forms at different points of the cycle, and the molecules of gases are much more sparse and disorganized than liquid molecules. That is one example of entropy at work during refrigeration.

But what does entropy actually do for us? How does the change in the molecules’ organization affect the way we make our HVAC systems work?

What does entropy indicate?

Before we answer any more complicated questions about entropy, we should establish what entropy means for system performance.

On a fundamental level, entropy indicates that the HVAC system has the capacity to perform work. Temperature, pressure, or phase changes wouldn’t occur within a unit if there weren’t enthalpy and entropy.

How does entropy fluctuate throughout the cycle?

There are four main phases in the refrigeration cycle: compression, condensation, expansion, and evaporation.

Each stage of the cycle has a corresponding part within an HVAC unit. It’s pretty easy to remember those parts because they are named after the processes. For example, compression occurs in the compressor, while condensation occurs in the condenser. Expansion occurs after the expansion valve or other metering device, preceding the evaporator in the refrigeration circuit. (I’ll bet you can guess what happens in the evaporator.)

Entropy varies with each process, mainly where phase changes occur. Phase changes occur in the evaporator and the condenser. Entropy rises while the refrigerant is in the evaporator, and it falls while the refrigerant is in the condenser. Entropy slightly decreases and increases during the expansion phase, and it stays constant in the compressor.

A T-S diagram like the one shown below shows how entropy changes in the system along with the temperature. T represents temperature, and S represents entropy. 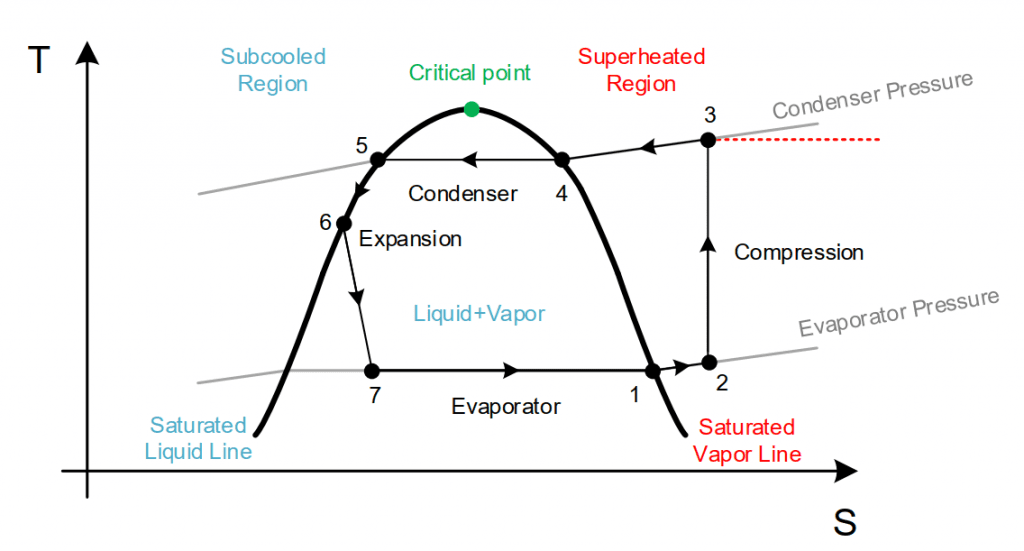 Why does entropy vary across those stages?

Remember when I said that changes in entropy are most noticeable between phase changes?

Which situation sounds more chaotic? Driving at a slow to moderate pace on a high-traffic freeway or participating in a street race on the interstate? The latter is much more disorderly, and a similar principle applies to the higher entropy of gases than liquids.

The refrigerant evaporates in the evaporator. It transforms from a liquid to a gas, meaning that its molecular structure becomes disorganized. The molecules begin moving so quickly that they break free from the liquid and vaporize. Entropy is the work performed during the phase change. It is the quickening and separation of the molecules as they adopt a gaseous form.

The opposite is true for the condenser. The compression phase is all about pressure and temperature increase (with almost no change in entropy), so the refrigerant enters the condenser as a hot, high-pressure gas. The refrigerant cools in the condenser, restoring some degree of order as the gas molecules tighten back into a liquid. Entropy appears to decrease.

However, it’s worth noting that the second law of thermodynamics forbids entropy from decreasing over time. When entropy appears to reduce within the system, more entropy occurs outside the system, allowing entropy to drop within the HVAC unit.

Entropy’s relationship with temperature and pressure

Entropy doesn’t just correlate with phases of matter. Temperature and pressure also have a say in the entropy of a system.

We’ve already established that gases have more entropy than liquids. Because of that, it’s intuitive that a temperature increase will cause entropy to rise. After all, phase changes require a certain amount of heat to be added. In my research, I reached out to Carter Stanfield of the Fundamentals of HVACR blog, and I’ll paraphrase his good explanation of temperature’s relationship to entropy:

But what about pressure?

Compression is the opposite of expansion, so it makes sense that compression would decrease entropy if expansion increases it. Since gases are compressible, the molecules can be squeezed closer together as high pressure reduces the volume. When molecules have less room to zoom past each other, they’re not as disorderly as they were before.

Remember the street racing example? Imagine that the racers reach a mass of cars going about 10 mph over the speed limit. The racers have to slow down and stay in their own lanes because the highway is too crowded to weave in and out of traffic. It’s a bit more orderly without people driving in every direction, right? The same rule applies to gases when they have less room to zoom about due to high-pressure, low-volume conditions.

Why should we care about entropy?

I know it sounds like this knowledge about entropy is only useful for nerds who love learning about the chemistry and physics of HVAC systems. Hear me out, though. When you know what entropy is and how it works within your HVAC units, that knowledge has quite a few applications.

Entropy is a good value to keep in mind when you try to boost a unit’s efficiency. When thinking about efficiency, it’s useful to think of entropy as [wasted] energy potential. Since there is no such thing as a 100% efficient unit, one way to get a more efficient unit is to aim to reduce entropy.

This is where you should be aware of enthalpy. If you know your desired heat content within your system, you can focus on getting the desired amount of BTUs to move heat with the lowest possible entropy.

Entropy will always occur, but you will get a more efficient system if you can get it to do its job without an excess of entropy. One way to do this is to reduce the temperature and pressure of your system. You obviously won’t want to minimize those variables enough to make your unit quit working, but you can save some energy by aiming to lower entropy. Exposed Duct High Temperature Limit
I bought a crappy old house built in the 1920s a few years into my marriage. There were so many things wrong with it. Water intrusion, leaking pipes, roots in the sewer line… on and on. But it was our house, and we loved it. One issue was that the water heater was tiny, and […]
Read more Top Residential A/C Maintenance Tips
Bert recently made a video about his top residential A/C maintenance service tips. He showed some pretty good practices in there, so we’re going to revisit them in this article. Maintenance procedures are vital to any HVAC business, especially those specializing in residential A/C. When we do maintenances, the customers see our faces, and when […]
Read more
More tech tips
loading