Why would someone want to take an already complicated machine and make it even more complicated? The answer: human arrogance and engineer's hubris. (Just kidding.) Fortunately, thousands of these ice machines have been installed and serviced. Let's take a little overview of a few of the critical differences and things to consider when working on remote ice machines versus self-contained models. We'll be covering Manitowoc remote series in this article, as other brands usually have very similar setups.

There are several different types of ‘split system' ice machines. Some have only the condenser coil, condenser fan, and head pressure control valve in the remote unit. Others have the entire traditional condensing unit, including the compressor, receiver, and accumulator outside. Higher capacity systems require larger compressors and components that can take up valuable space, which many restaurants have a limited amount of.

How do they work?

Here is a refrigerant piping schematic from a self-contained Manitowoc S-Series ice machine: 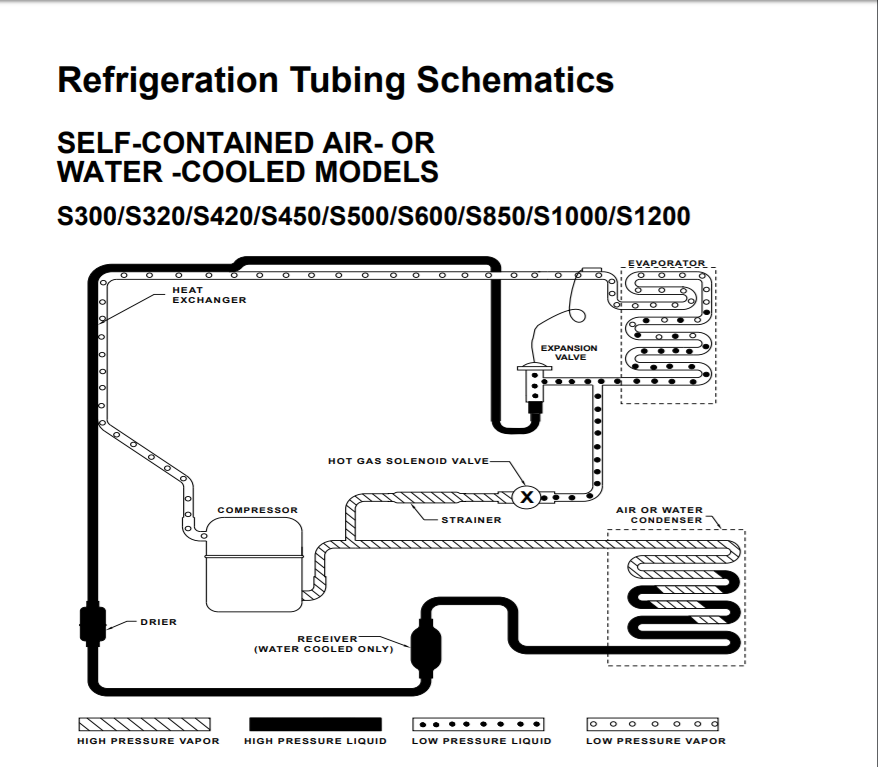 Notice that the refrigeration piping is very similar to a typical refrigeration system, but with the addition of a hot gas bypass line from the compressor discharge line to the evaporator inlet after the TXV. This method is used in the harvest cycle to divert hot gas from the compressor to the evaporator grid to allow the ice to drop. In a remote ice machine, there are several more components.

Some extra components often include:

Note the differences in the following piping schematic for Manitowoc Remote S-Series machines: 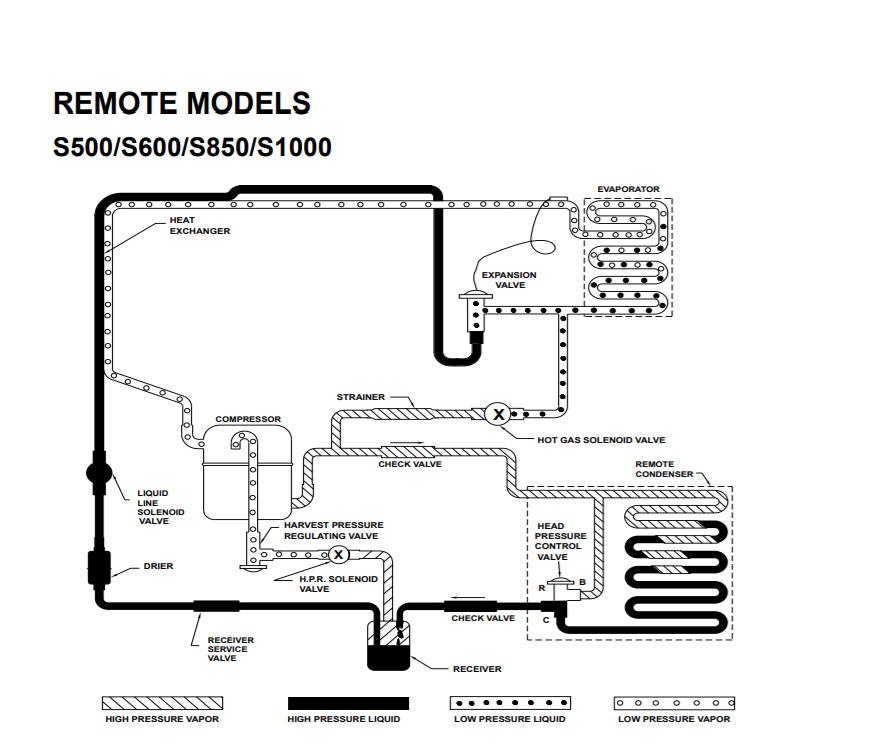 In this diagram, you can see some extra considerations to consider when troubleshooting these remote machines. Since the remote condensing units often are exposed to varying ambient conditions, they must be equipped with a Head Pressure Control Valve (headmaster) to maintain a minimum pressure in the liquid line to the expansion valve (typically 180 psi) in low ambient conditions. The liquid receiver stores “extra” refrigerant to be used by the system in low ambient conditions. If charged correctly, the receiver is designed to maintain sufficient charge in the system to operate down to approximately -20°f ambient. These components are typical in any refrigeration system exposed to wide outdoor ambient temperature swings. However, there is a set of parts that are not typically encountered: the harvest pressure regulator (HPR) and solenoid.

During the harvest cycle, the hot gas valve is energized. Discharge gas is piped directly to the evaporator inlet via the hot gas bypass line to assist in harvesting the ice. For this to work, there must be a sufficient amount of heat maintained to be rejected long enough for the ice to drop within the 3-minute harvest cycle. At times, there may not be enough heat to keep the hot gas bypass line warm enough to harvest the ice in the evaporator efficiently, and the high-temperature, high-pressure vapor can begin to condense into a liquid in the evaporator—causing liquid to enter the suction line and the compressor. As we all know, compressors are not fond of trying to compress a liquid, so Manitowoc solved this problem by adding the HPR valve.

During the harvest cycle, the HPR solenoid is energized, allowing vapor from the top of the receiver to meet the HPR valve. The HPR valve is similar to the headmaster in that it modulates refrigerant to maintain a minimum pressure. If the suction pressure falls too low during the harvest cycle, we lose the ability to transfer sufficient heat to the evaporator—the HPR keeps the suction pressure high enough through the harvest cycle to maintain the heat required for proper harvest. It's a simple enough concept, yet it's often overlooked by many technicians not familiar with remote systems.

Not so different after all

As with any system you are unfamiliar with or don't have much experience working on, never be afraid to consult tech support or search online for a service manual to read through. Service manuals for all the major ice machine brands can be found online. When it comes to ice machines, knowing the sequence of operations is the key to successfully troubleshooting any make or model. Remote ice machines are not much different from typical refrigeration systems in the way they function. Patience is a must for any technician who has the pleasure of working on ice machines. Remember always to be thorough and observant. 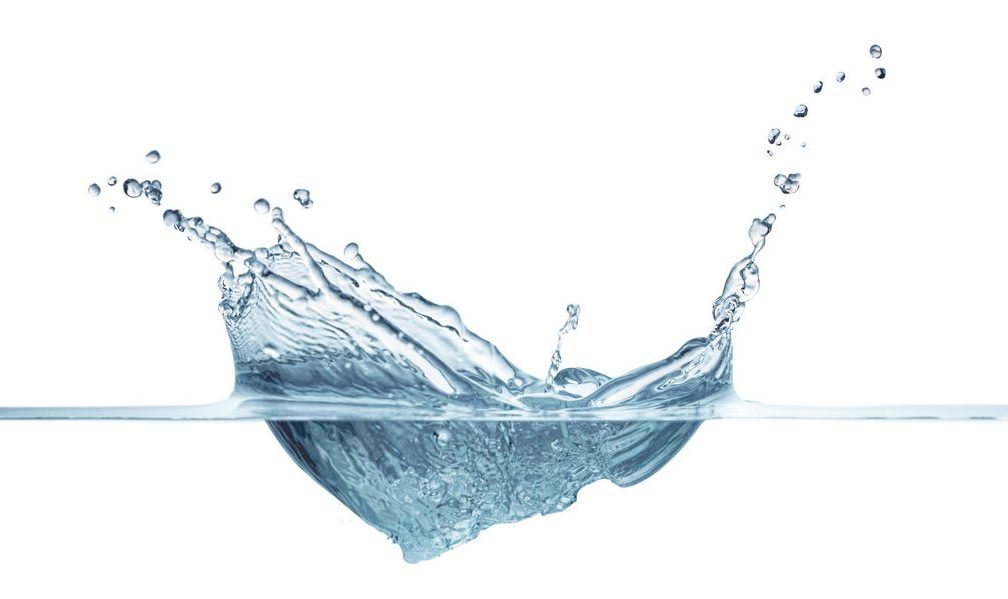 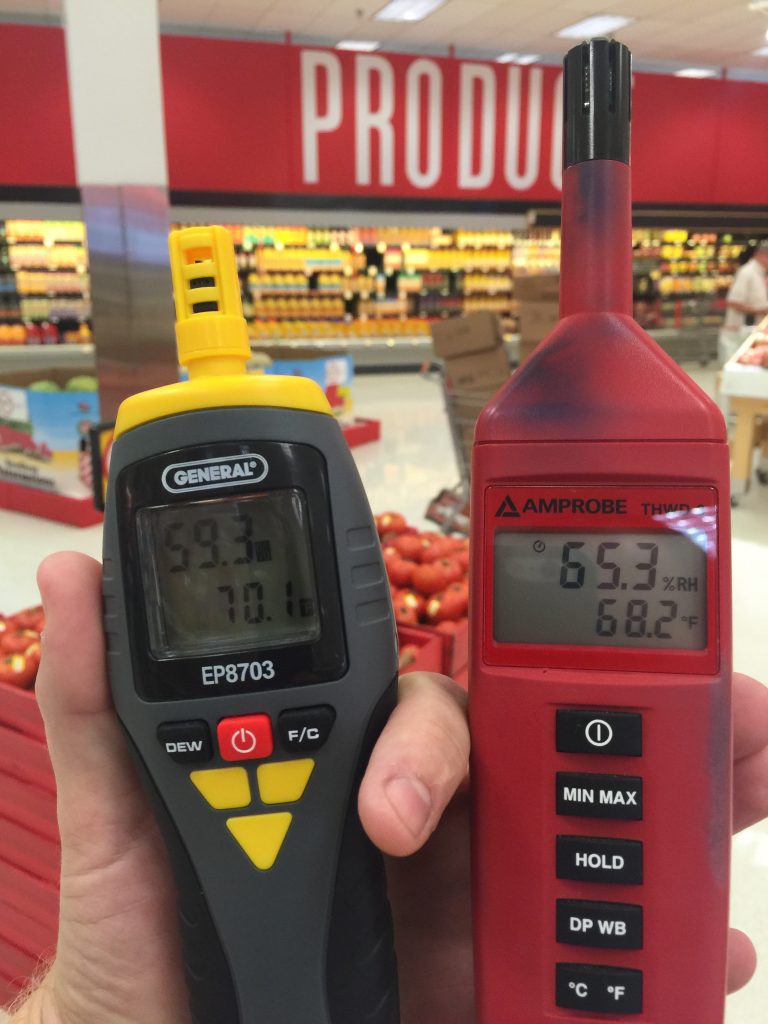 THE MOST IMPORTANT Skill a Tech Can Have
I knew a tech when I was just starting who was hands down, no questions asked, the best technician at the company I worked. EVERYONE, we are talking over 60 techs… we all knew it. His name was Mike Gilford. Being the little brown-nosing ladder climber I was, I made a complete study of Mike […]
Read more 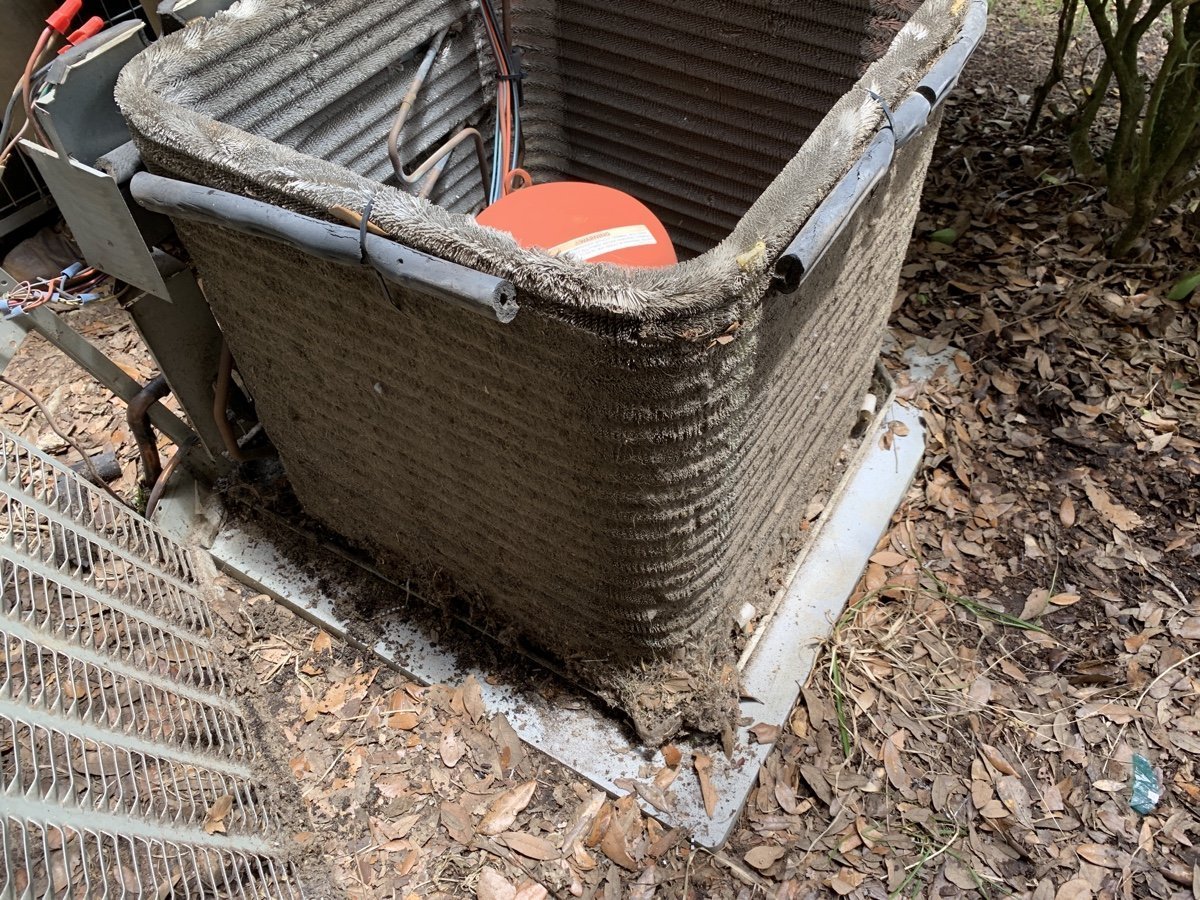 Cleaning Condenser Coils Still Matters
There was a story that came out recently based on an ASHRAE study performed by David Yuill from the University of Nebraska. The study appeared to indicate that condenser coil cleanliness makes no difference on system performance and efficiency. Those of us who have worked in the field know that coil cleaning matters because most […]
Read more
More tech tips