History and Basics of Refrigeration For people who live in warmer climates, refrigeration is considered a life-or-death matter. It’s perhaps poetic that one of the first major uses of refrigeration in America occurred after the assassination attempt of President James A. Garfield. Four months into his first term, Garfield was fatally shot by Charles Guiteau, a madman who despised Garfield for failing to grant him a position in his cabinet.

Guiteau shot the President at the Baltimore and Potomac Railroad Station on July 2, 1881. Garfield was seriously injured and carried back to the White House. When Garfield arrived, naval engineers quickly rigged a cooling system. It was quite simple, merely consisting of a fan that blew over fabric moistened with blocks of ice and ice water. Medical professionals believed that cooler temperatures would decrease infection and contagion. Although their hypothesis was valid, Garfield still died 79 days later.

That was not the first occurrence of refrigeration in America, however. The principles behind Garfield's cooling system were also used in the work of a humble physician in a hamlet on Florida’s Gulf Coast, Apalachicola. His name was John Gorrie. Born on the island of Nevis in 1802 and completing his medical education in New York, Gorrie moved to Apalachicola because of his passion for treating tropical diseases, namely malaria. Malaria is a mosquito-borne illness. However, in Gorrie's time, the disease was initially thought to be a result of swampy climates' hot and humid air, hence its name, Italian for “bad air.”

Gorrie foresaw the beneficial impact cooler temperatures would have on his patients. His early efforts to cool his patients included suspending ice buckets from the ceiling. However, he later developed a cooling technology of his own. Although Gorrie did not invent compression refrigeration as we know it, he invented the first ice machine. His machine was popular locally, and he received a patent for his invention in 1851. Unfortunately, a series of unfortunate events followed, including the death of Gorrie's main investor. Gorrie died in 1855, humiliated, bankrupt, and alone. Gorrie was later recognized for his efforts in modern refrigeration; he was memorialized in 1914 when sculptor C.A. Pillars created a monument of him located in the National Statuary Hall Collection. He is one of Florida's two statues in the hall.

The monument of John Gorrie was erected in 1914.

Like many American inventors, Gorrie’s work was preceded by Benjamin Franklin. Franklin's contribution to refrigeration was much less grand than his lightning key or bifocals, but he discovered that alcohol evaporation could freeze water. Franklin's insight paved the way for the synthesis of Freon in 1928. Renowned scientists such as William Cullen, Robert Faraday, and Jacob Perkins also contributed to the development of refrigeration and air conditioning. Perkins, who patented the first vapor-compression refrigeration cycle in 1835, was celebrated as the “father of the refrigerator.”

The twentieth century witnessed the transformation of refrigeration and air conditioning experiments from an area of scientific research to a money-making endeavor. In 1902, Willis Carrier of the Buffalo Forge company constructed an “air conditioner” using cold groundwater, not compression. He began to sell it on the open market a bit later once the comfort effects became clear. By the 1950s, air conditioning and refrigeration were a staple of American life. Refrigeration was the technology that spurred pivotal changes in the way we preserved food and cooled spaces. Air conditioning even played a role in creating “galactic cities” in hotter climates, such as Houston, Las Vegas, Phoenix, Tampa, and Los Angeles. Today, refrigeration and air conditioning are central to protocols in quantum mechanics, computer science, the Internet, space exploration, vaccine development, and our good old domestic air conditioners and refrigerators. Consider this: without refrigeration, you wouldn’t have had any beer to drink during quarantine.

It’s amazing to think that the principles behind our everyday refrigeration and air conditioning practice were there, in utero, hundreds of years ago in the minds of Ben Franklin, John Gorrie, and President Garfield’s doctors. The first and most important of these is the distinction between open and closed refrigeration and the related issue of compression refrigeration and alternate forms of refrigeration.

Vapor-compression refrigeration is an entirely mechanical process. Whereas some open systems exploit the flow of air or wind, compression uses piping and circulation of a refrigerant through a circuit. This circuit consists of a compressor, a condenser, a metering device, and an evaporator. Its purpose is to regulate the flow of the refrigerant, changing phase states to create energy. Each component has its own role to play:

While refrigeration and air conditioning are related, there are important functions and applications that separate one from the other. Refrigeration denotes the transfer of heat from an undesirable location to a desirable one. Heat always transfers from warm to cold. This means that refrigeration does not “add cold” to a space; it removes heat from a space. When you place a lukewarm beer in the refrigerator, you are putting that into a location where heat will be removed from it, thus cooling it.

Air conditioning refers to the continuous process of regulating temperature, humidity, ventilation, and filtration. Its goal is to increase comfort by moving hot air from inside to outside, thus cooling the inside. Air conditioning not only makes our environments more comfortable, but it also makes the air safer to breathe. It does that by reducing humidity levels, preventing the development of mold and spores in the home. 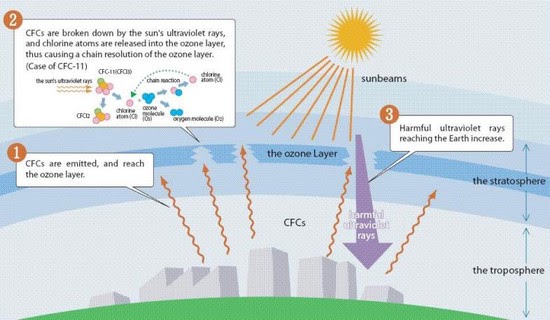 An infographic showing the environmental effect of CFCs.

Refrigeration is central to many of the most critical industries and technologies in the 21st century. You wouldn’t be reading this article if it weren't for computer room air conditioning units (CRACs). The CRACs keep the data servers cool and refrigerate easily overheated components. In the medical field, imaging technologies, vaccine cultures, and organ transplants would be impossible without refrigeration. Potentially lethal foodborne illnesses, such as botulism, E. coli, and trichinosis, have become rarer due to food safety and preservation techniques allowed by refrigeration. Even the Cold War—if unintentionally—owes its nickname to the refrigeration required for Kennedy’s New Society. Missiles, space travel, and nuclear storage required the temperature and energy stability provided by refrigeration.

Since the early 19th century, refrigeration has developed from a scientist’s toy to a moneymaker’s dream to a technological necessity. However, in recent decades climatologists have correlated the use of certain cooling procedures and refrigerants (CFCs, HCFCs) with climate change. As a result, modern refrigeration companies have begun researching solid-state and magnetic-based technologies to reduce environmental impact. Overall, these systems harken back to the more “open” systems pioneered by Gorrie and Carrier. They also bring life to Einstein’s pipe dream of “green” refrigeration and air conditioning. Modern refrigeration experts encourage us to look back to look forward.

In HVAC and refrigeration, the past is interesting and complex, and the future is bright. Beware of "Ghost" Voltage
Disclaimer: “Ghost voltage” is a term used by techs to explain a phenomenon where they measure voltage they don't expect or when the voltage they see doesn't do the work they expect. More advanced techs know how to use the Lo-Z (low impedance) mode on their voltmeter if it has one to help eliminate this. […]
Read more Pressure Difference and Pump Flow
This article was written by Michael Housh, owner of Housh Home Energy and a regular contributor to HVAC School. Thanks, Michael! This is another article in trying to relate the air side of HVAC with the water side. In this article, I’m going to talk about how to determine pump flow (GPM) based on the […]
Read more Can Pulling a Vacuum too Fast Freeze Water/Moisture?
First, I want to give credit where credit is due. This post is made possible by the fantastic demonstration video by Neil Comparetto that I embedded below. Before you get bored and stop reading, I want to get the conclusion out in the air. Ice can form in a vacuum, but I still advise pulling a […]
Read more
More tech tips
loading